Opera in the house

A week ago I went to Papagano Restaurant near to Covent Garden in London. This seems to be a place you either love or hate, the decoration is opulent, using loads of fabrics, and at times bizarre. The food is great, and the whole event can feel quite theatrical, which is no mistake. The reason I was there was to see two friends sing. The are both opera singers, Louise Kleboe a mezzo-voice and Russell Ixer, a Lyric Tenor. It was great fun, with both of them roaming the restaurant singing arias during the evening. They have finished the run of events on the 22nd December 2005, but I hope they are able to do some more in 2006. It always makes a change to hear live music in any restaurant, but to hear quality live opera is rare.

Both Russell and Louise have performed elsewhere, Russell spent some of 2005 performing as Gastone in La Traviata around the UK, while Louise has done a number of gigs internationally. In my humble opinion, they are both worth going to hear.
Posted by peterwatts at 4:18 PM No comments: 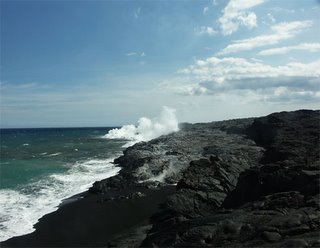 A couple of years ago I started taking panoramic images of London. Over 120 to date have been put together. Inspired by this, and actually enjoying it, I then had the fantastic opportunity to do the same for Hawaii. – the result was The Hawaii Map. Using the excuse of having to travel there for a wedding, I then spent an extra 2 weeks on Hawaii Big Island with a camera, tripod and a borrowed truck, kindly lent to me by Paradise Helicopters. You can see the red jeep in some of the photos – it crops up every now and again. This was a fantastic thing to be lent, great fun and made a great platform for taking the images around Volcano National Park. The format was the same, using a map and pinning a load of images to it. The whole thing is driven by Mai Technology. So now you can tour Hawaii Big Island from the comfort of your home, see some of the lovely beaches, visit the volcanoes and other bits and pieces. I hope to go back, not least so I can enjoy relaxing on some of the beaches, but also to take some more images of the other islands in the chain.
Posted by peterwatts at 9:02 AM No comments: