2009 has been an exciting time for Panoramic Earth. the number of 360 images has grown steadily over the past 12 months, as has the number of contributors to the site. Here are some of the achievements of the past year:
But, we will not rest there. A lot of things on the net have changed since Panoramic Earth was first launched, bringing in advances like new Flash panoramas viewers, changes to Google maps and ability to embed content in other websites. In the next year we hope to see:
So, 2010 promises to be busy, full of challenges and potential. We look forward to seeing what exciting places people photograph, and wish all our members a very Happy New Year for 2010.
Posted by peterwatts at 9:35 AM No comments:

TwitterCounter is yet another tool slurping data from Twitter and presenting it in visual format. In it you can see trends of how frequently different users are tweeting, who follows them and other statistics. The screenshot below shows the trending graph for Panoramic Earth on the day we signed up for the service. Interestingly, our Twitter profile showed that we had over twice as many followers and lamost 3 times as many tweets as were showing on our TwitterCounter profile. Not quite sure why that should be. 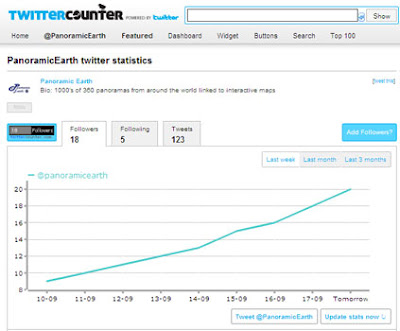 A couple of days ago Google launched a new way of viewing images, the Image Swirl. Still in Beta phase, it attempts to collect groups of related images together, presenting them in clusters. The user selects a cluster of interest, which then expands into it's one circle, still connected to previous 'higher' circles on the tree. In this way you dive down into ever more specific types of images. Concept shown below for the Eiffel Tower in Paris, the opening screen showing the main image clusters: 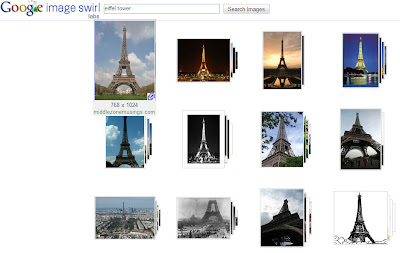 Screenshot of Eiffel Tower top part of Swirl
And then, several steps in showing the expanded, yet still linked, sub sets of images of the Eiffel Tower. Eventually you get to single images which then link to the sites they are placed in. This reminds me a bit of diving into fractal images, but is, naturally, of much more immediate use. 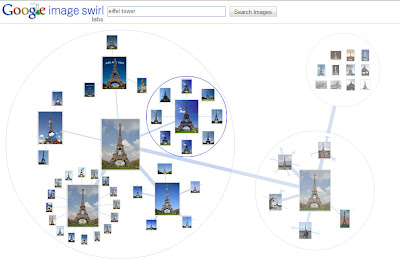 It is a much more relaxing and playful way of looking for images than a straight image search. The rationale and background blurb, taken from the Google Blog, states:
Posted by peterwatts at 1:36 AM No comments:

'Klaus Mayer, a photographer in Australia, recently photographed a UFO beside a road'. The image has attracted a lot of attention since being published, linked to a Google map showing exactly where it was seen.

A fantastic article opener, suitable for an X-files episode. The truth, however, is that this is a sculpture which, being made of scrap metal, is unlikely to fly anywhere fast, and the image a 360 panorama showing the Australian countryside. Just one of several lining the A1 near to Lower Light.

But it made a good headline!
Posted by peterwatts at 3:25 PM No comments:

Nearly 40 panoramas of the beaches and attractions in Phuket have recently been added to Panoramic Earth. Most of Phuket's beaches line the western side of the island, with the most famous being Patong Beach and Kata Beach, lined with hotels and beach resorts. However, as the virtual tour of Phuket shows, there are numerous other beaches worth exploring. Some of them arguably more beautiful than the popular ones, and certainly less developed.

Patong Beach 360 panorama; © Peter Watts, all rights reserved.
Phuket has more to offer than just beaches. Worth visiting inland are Elephant Villages offering elephant trekking rides in the jungle, waterfalls and the Gibbon Rehabilitation Centre in Khao Phro Thaeo Wildlife Park. 360 panorama virtual tours of these are also found on the site.

Bang Tao Beach 360 panorama; © Peter Watts, all rights reserved.
All built near the beautiful Bang Tao Beach. See the Phuket Map for more virtual tours and 360 panoramas of the beaches, sights and attractions of Phuket.
Posted by peterwatts at 4:08 AM 3 comments:

Yesterday saw a sudden surge in the number of people wanting information about Broadway and Battery Place in New York. Suddenly, from the usual trickle, hundreds of people were viewing the page data, mostly wanting to know where it is and how to get there.

360 panorama of Broadway and Battery Place, New York. © Peter Watts
We are intrigued, and can only guess that there may have been a fireworks display or some such held there. If anyone can shed any light on it we'd love to know!
Posted by peterwatts at 2:07 AM No comments:

A month ago Panoramic Earth introduced Tags for panoramic images. A month on the success of this has become clear with:
Some of the most viewed tag pages:


england ¦ greater london ¦ australia ¦ beach ¦ cave ¦ hawaii ¦ vatican
This shows the usefulness of image tags in promoting the panoramic images on the site. Tags are added by the photographer as they upload the images and are therefore very specific and targetted - make use of them!

Panoramic Earth on Twitter: We have recently joined Twitter, come follow us there. Both posts from this blog and new images added to Panoramic Earth will be tweeted.

Posted by peterwatts at 11:04 AM No comments: 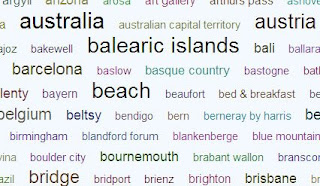 Panoramic Earth has just introduced a Tag Cloud onto the site to help people find images of similar subject matter. The tags are set by the photographer during the uploading process, reflecting the subject content. It is auto-populated with the geographical location data and basic image type.
Posted by peterwatts at 2:48 AM No comments:

Site promotion is always an important issue. The net never stands still and it can be hard to keep up with new tools. One such tool Panoramic Earth is now using is Feedmil, a feed search engine. Feedmil provides topic-focused feeds for all types of medial like blogs, microblogs, public and social media feeds as well as podcasts. It is set up to help people search feeds of interest efficiently and quickly through simple interfaces backed by innovative technologies.

Submitting a feed is done through a simple form. Feedmil also pro-actively hunts out feeds for itself and then contacts feed producers to submit a description of it.

For Users, the Feedmil interface allows you to specify both the search query and also the popularity range of feeds. Making full potential of the 'Long Tail', users can quickly discover high quality, less popular feeds for subjects of interest. Slider controls adjust the search for topic relevance giving more accurate results while allowing you to explore the feeds you like serendipitously.

Feedmil was founded in 2008 by a web scientist and 3 enthusiastic search engineers. It is currently a privately funded startup, aiming to become 'the best feed search engine in the world'.
Posted by peterwatts at 3:55 AM 1 comment:

Often the best viewpoints over cities and the like is at the top of monuments. This poses particular challenges as taking a 360° image from a single point on the monument will probably result in a lot of blank wall, and only a partial view of the potential view. Panoramic Earth has a new contributor, Richard Herring, who specializes in taking a series of images that, when put together, give the impression of hanging in mid air, as if the monument or tower from which the images were taken did not exist. He says the following:

'I'm a part-time traveller and occasional photographer, with a particular interest in SE Asia. As I hope my contributed panoramas show, I enjoy the challenge of taking panoramas from high places like towers and monuments, where even if there were space and time to set up a tripod, 180 degrees of the image would be of blank walls and tourists. Under those circumstances, there's no alternative to a steady hand and a good deal of luck (and often a good deal of manual post-processing.) But it's worth the effort, even if the results are sometimes technically flawed, to get a spectacular view that couldn't be achieved any other way.'

These results can be clearly seen in 360 panoramas constructed from series of photos taken from the top of the from the Petřin Tower in Prague, the Monument in London and the Wat Si Saket image from Bankgok (compare with this Golden Mount image taken without moving around the platform and shows the chedi on the top).

For those trying this kind of image it is useful to consider the following:
As Richard shows, the results can be very good. Other examples of this kind of picture on Panoramic Earth include:

Panoramas of London in the Snow

The 2nd February 2009 saw some of the heaviest snowfalls in London for many years. Much of the city closed down, public transport was severely affected and for a time London's airports closed. As a result, London was much quieter than normal as the landscape was transformed into something magical.