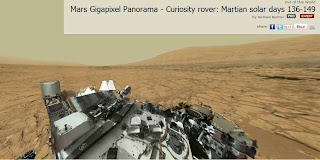 The Curiosity Rover on Mars has been busy taking pictures. About 405 of them with the two cameras on the vehicle's mast. These have been combined to produce a spherical panorama measuring 90000x45000 pixels (or 4 billion pixels). The result is a stunning spherical, gigapixel image of the Gale Crater

For those who want the technical details, this was taken betwen Martian solar days 136-149
using both the 100mm Narrow Angle Camera (NAC), and 34mm Medium Angle Camera (MAC). Though not the largest Gigapixel image ever produced, it is probably the most amazing in terms of technical achievement.

Though you may not be able to produce an image of this kind, you can get yourself a bit of the Mars mission. Ok, so it would be in Lego, but someone has put together plans for how to build your own Lego Curiosity Rover and landing stage
Posted by peterwatts at 4:46 PM No comments:

360 Panorama of London from The Shard

London has a new viewing platform, on level 72 of The Shard, the second highest building in the EU. To celebrate this The Shard has produced an interactive 360 virtual tour panorama showing the view over London. Taken from 245m above ground level, the panorama is peppered with hotspots giving information about various landmarks and places of interest.

Also within the image are links to various sounds recorded around the city as part of the London Sound Survey Project. There is the famous peal of bells from St Paul's Cathedral, monkeys from London Zoo and MP's (sounding much like the monkeys) from within Parliament.

The Shard is the tallest building in the United Kingdom. It is fully 309.6m (1,016 ft) tall with 95 floors topped out with a spire. You can find out more about it on Wikipedia.

This is not the biggest panorama of London. That honour goes to the massive 320 +Gigapixel image taken from BT Tower, which was the largest ever created in the world. However, I prefer this one for the interactivity and clarity of landscape.

So what is your favourite part of this image?
Posted by peterwatts at 3:09 PM No comments: 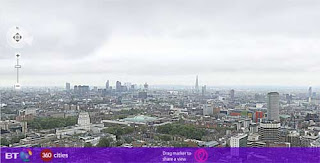 BT now own the largest 360 panorama in the world. Taken from the top of the BT tower during the London Olympics in 2012, it shows of the heart of the city. To mark the event BT have hidden 3 images of their Buzby mascot within the image. The lucky finders will receive prizes. It beats the 80 gigapixel image of  released in 2010 by quite some distance.

This 320 gigapixel image was created by stitching together some 48,640 individual frames taken with  four Canon EOS 7D cameras. It is hosted by 360 Cities. The image is most impressive in the mid-distance range as the day on which it was taken is quite hazy resulting in loss of clarity at long range. As with all images of this kind, there are increasing stitching errors as one gets closer to the tower, and the office buildings nearby are suffering some a degree of 'flexability'.

All the landmarks are clearly visible, and by the looks of the scarring on the lower end of , it would appear that an exhibition event has just left the park.

A collection of over 300 panoramas taken around the city, linked to Google Maps, can be found on this London virtual tour map.
Posted by peterwatts at 2:13 PM No comments: